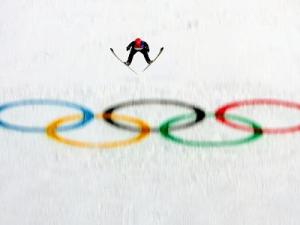 Ever wondered why ski jumping is the only Winter Olympics discipline that is still restricted to men? Of course you have. And here’s the answer: it has to do with politics.

In the March 15 issue of The New Yorker, Nick Paumgarten presents the official reason:

The reason advanced by the International Olympic Committee is that the field of women who jump isn’t deep enough, but this argument […] disintegrates when you consider the wan competition in women’s ice hockey or the shallow talent pool in the newly added skiercross.

Then he explains what is really going on:

The real reason that Olympic and FIS officials don’t want women jumping could be that, as Annette Hofmann, a professor of sports studies at the Ludwigsburg University of Education, in Germany, has argued in an academic paper, the women may soon be jumping farther than the men, because the ideal body type for distance is lean and small. Jumping is now the province not of strapping Norsemen but of anorexic males. Prior to the Games, the record holder on the Olympic jump at Whistler, the resort north of Vancouver where many of the skiing events took place, was a woman named Lindsey Van (not Vonn). The participation of women would threaten jumping’s virile self-image and dilute the pool of money for prizes and endorsements.

The whole article is here (gated); I briefly googled Annette Hofmann’s paper but couldn’t find it.