The recent flood in Poland has taken a heavy toll. More than 14 people have been killed and thousands evacuated. The damage from the Oder flood is estimated to exceed $2.5 billion. The Polish government has already promised to disburse $46 million to people in the most heavily affected regions, about $1,800 per household. Such disaster relief provided by the government is clearly vital to help those affected by the flood. But do affected citizens electorally reward such rapid policy responses to natural disasters and how long will their gratitude last?

Jens Hainmueller (MIT) and I address this question in a study that exploits the 2002 Elbe flooding in Germany as a natural experiment to estimate the short- and long-term electoral returns to disaster relief. Given the well known “peak-and-end” rule for forming retrospective judgments, the 2002 Elbe flooding provides an ideal case to establish an upper bound for the longevity of voter gratitude, as the incumbent’s policy response to the flood was both “peak” and “end” — it was massive and occurred immediately prior to a federal election. 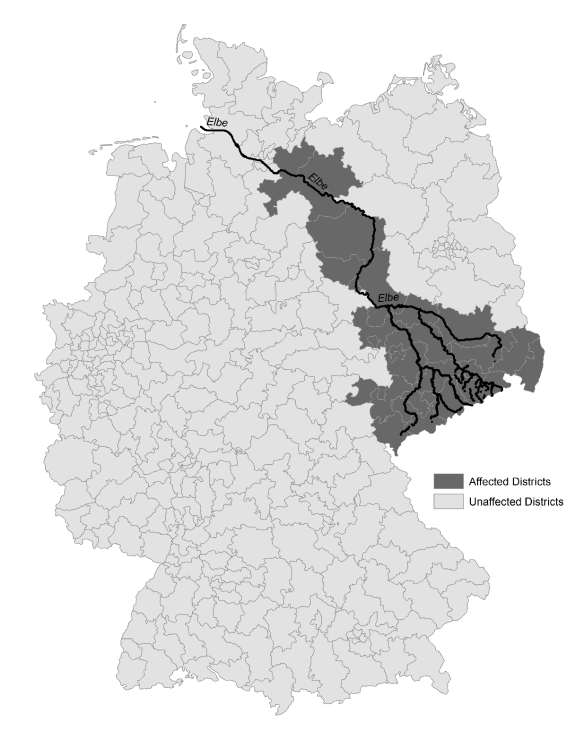 Affected versus Unaffected Electoral Districts in the 2002 Election

The 2002 Elbe flooding affected large parts of East Germany. From a hydrological perspective, floods with such severity occur only once every 500 to 1,000 years. The German government reacted swiftly. 45,000 soldiers were sent to the affected regions to stabilize dams, evacuate people in danger, and coordinate the disaster response. In addition, Chancellor Schöder quickly announced an emergency program that provided €385 million disaster relief aid. Moreover, the incumbent SPD-Greens coalition introduced a “Flood victims solidarity” bill backed up by a €7.1 billion disaster relief fund, the largest amount ever spent in the context of a natural disaster in German history.

We find that the flood response resulted in an immediate electoral gain for the Social Democrats (SPD), the major incumbent party, of about 7 percentage points in affected areas in the 2002 election. We also find that about 25 percent of this short-term return carried over to the 2005 election and that the electoral gains vanished entirely by 2009. Our estimates imply that the SPD government paid about €63,000 per additional vote in the affected regions in the 2002 election. The price per vote drops to about €49,000 if we take the long-term electoral return to disaster relief into account.

Overall the results suggest that even though electoral returns to beneficial policy decay over time, policymakers can, at least given very favorable circumstances, generate voter gratitude that persists several years — perhaps longer than scholarship has acknowledged so far. At the same time policymakers should not expect to earn much credit among voters for policies that date back more than a few years. Electoral accountability alone may therefore be ill-suited to properly incentivize policymakers to seek appropriate long-term policy solutions to fundamental economic, financial, and environmental problems, because voter gratitude is too short-lived.

2 thoughts on “Floods and Elections: How Lasting is Voter Gratitude for Disaster Relief Spending?”